First of all, I congratulate DM on his first post on 0to60. To those of you who noticed that the post is displayed under my name, I can verify that it was written by DM, just sent via me. However, he now has his own account, so we should be in business (touch wood, or ‘knock on wood’ if you’re living across the pond.)

Now, to business. I thought I would deliver a verdict on my favourite executive saloon to rival the Audi A8, and that is of course, the wonderful Mercedes Benz S-Class. Like the Audi, this car tries to be discreet and its shape can even be mistaken for that of the larger and considerably more expensive Maybach 57. So, this is a good start. People will think you’re more rich than you really are. The size is one of the more noticeable features of this car. The Short Wheel Base (SWB) version is more than 5 metres long and the Long Wheel Base (LWB) nearly 5.2 metres in length. So, parallel parking should be a joy.

Now I warn you once again, Mercedes are selling their cars in some very dodgy colours and it is important that you don’t spoil your new S-Class with one of them. The car pictured is painted with Mercedes ‘Dolomite Brown’ and frankly it is hideous. So, you have been warned.

Now, onto the matter of the price. Well, you weren’t expecting it to be cheap were you? It starts at the rather large sum of £59,195 for the most basic model. By the time you have finished adding all of your little extras to the car, for example, the £8500 Bang & Olufsen Rear Seat Entertainment Package (you’d have to have money to burn…) you may be looking at a bill for £65,000+

So, on that note, we’ll have a look at some specifications for the basic S350 BlueTEC Diesel model, with a 3.0l engine:

So, it’s kind of expensive to tax. What the heck? You’d have to be rather ‘loaded’ to buy one in the first place. But, don’t despair, if you can’t afford this, Mercedes Benz sell many approved used cars and you can pick up an older S-Class for around £25,000 that will still be good, and fairly cheap to run. 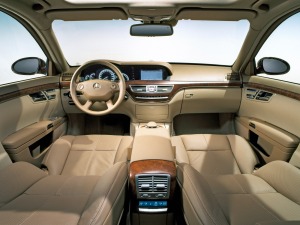 S-Class Interior (as viewed from the rear seats)

Now, for the interior and the gadgets. The S-Class has always set the standard for executive cars to follow and has always been the first to have all of the latest gadgets. This model does not fall short of the marker by any means. It uses infra red cameras to build a picture of the road ahead and then creates an image on the dashboard for the driver to glance at, so that they can see much further than they can with ordinary lights. The car can also read traffic and will slow down in heavy traffic and speed up again when it’s cleared without any input from the person behind the wheel. All you need do is steer. Except, with the lane guidance package, the car steers itself by monitoring the lines marking the road and staying between them. So, all that leaves the driver to do is sit back and choose one of many different types of massage that your seat provides. Sounds good?

And, the party doesn’t stop in the back of the car either, with more massages, live television and a refrigerator, in which you can keep many a can of tasty beverage.