I wouldn’t own a Skoda – I think that they’re boring, but the people who own them seem to adore their car. Skoda make cars that are practical but are sometimes behind the times, though with immodest model names such as ‘Fabia’ and ‘Superb’ the company clearly think that the cars they make are a little special. I’ve been trying to find out what’s special about the Octavia: 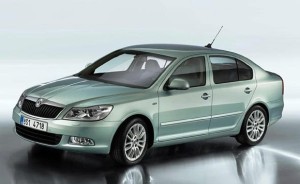 At a glance… not much. The hatchback model looks like the sort of car that one would see on an infant’s TV programme.  It looks like a car and that’s all. The mild bulge on the headlights is perhaps the only distinguishing feature. Underneath, it’s a Golf but Skoda have worked hard in removing nearly all traces of style. Perhaps Octavia is Czech for boring.

Inside, things do improve slightly. It is, at least, very spacious and things are laid out well. Some effort has gone into making things pleasing to the eye. Oddly, the nicest looking things are the doors which flow nicely from front to back but, unless you’ve spent too much money on this car, the back doors will have handles used to raise and lower the windows.

The hidden gems of this car are the reasons why, 8 out of 10 times, when you call for a taxi in the UK one of these turns up. As has already been said, it is spacious, but, on top of that, everything is exceedingly robust. The hard plastics are virtually indestructible which is good when you’re carrying around many passengers. The car itself will also work for at least a millennium and servicing costs are cheap. The running costs are suspiciously small thanks to low insurance and a range of efficient (if sometimes slow) engines. I think that these benefits make up for what the car lacks in looks.

As I said at the start, Skoda are behind the times. This shows when you buy a base model Octavia – as it can be lacking in equipment which you would get if you spent more money on a competitor. On Skoda’s website, one of the cars most amazing features is its adjustable steering column, so there can’t be much else to talk about, right?

You can tell Skoda is owned by the VW group when you see the number of variants of this car. Here are the specs of a mid-range Octavia Hatch: the SE 1.4 TSI

There’s nothing wrong with the Octavia, but there’s not that much great either. The low running costs, quality and reliability bring it up to a 3 star rating from me. Slowly though, the manufacturer is making up ground on its competitors and, with a new Octavia due next year, Skoda are becoming a much bigger player.