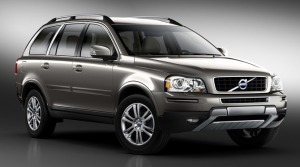 4x4s are very topical at this time year, especially with the harsh winters which we’ve seen in the UK recently. Sales of this sort of car increase substantially about now, and the amount of snow seen across Britain over the past 2 years has made buyers eagerly seek out these fuel hungry giants. Lately, Land Rover has broken a number of their sales records, and not just because of the release of the Evoque. Although this year’s winter is not set to be as cold, consumers are still after a 4-wheel-drive car and the subject of this review, the Volvo XC90, is the car of choice for many.

The XC90 represents excellent value for money, whilst providing all of the interior comfort you and your family could need. Space on the inside is plentiful, even for 3rd row passengers, easily allowing more room in the very back than the substantially bigger Audi Q7. The interior does seem to have been the main focus of the Volvo designers and it works very well. Everything is laid out correctly and easily within reach of the driver and passenger. An uncluttered and modern look has also evolved from the various editions of the XC90 with buttons that are conveniently large and far apart owing to the hidden Sat Nav screen. A potential buyer also has a great deal of choice when personalizing their car with a varied selection of interior colours and trim levels available from the basic but well equipped ES up to the luxurious Executive and R-design levels.

Price is also on the side of the XC90 compared to many of its competitors. One can spend in excess of £100,000 on an Audi Q7, but you would struggle to make an XC90 cost half of what you might spend on a Range Rover. No, Volvo isn’t a premium brand, but the XC90 will more than do for most families upgrading from a large estate or crossover car. I would recommend the Executive trim level for most, which provides a plentiful supply of equipment, and, with the XC90’s very low base price, you can afford to splash out. This trim level gives you ventilated and massaging seats as well as an array of safety features to protect all of the passengers in the car – just as you’d expect from Volvo.

Unfortunately, once you’re standing on the outside of the car, the good stuff starts to end. The XC90 isn’t exactly the most stylish of SUVs and there have been virtually no changes to the exterior since the very first cars in 2002. This 9-year-old design has made the car look somewhat dated because only very minor changes to insignificant parts have taken place. The dated look is set to continue with no new design to be released until 2013/14, so for the low price you shall have to suffer the plight of an unfasionable SUV. 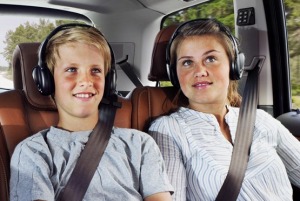 I don't know why she's pulling that face...

The engine is also an issue. The only available option is a 2.4l diesel which is very underpowered. The result is like fixing a Shetland pony to an articulated lorry. A big V8 engine used to be offered, but that was so inefficient that nobody wanted it.  But does such a small engine give the car comparatively great fuel efficiency? Not really. The small engine has to work very hard to pull the heavy XC90 around so it drinks as much, if not more, fuel than its 3 litre cousins. The comparison tool on Volvo’s own website says it all. Compared to an Audi Q7, the XC90: has a larger carbon footprint; has less power; is less fuel-efficient; and has a higher annual road tax. Unimpressive.

And now the specs of the most basic XC90:

It’s cheap, and as long as you’re sitting on the inside, it’s very good – 3 Stars